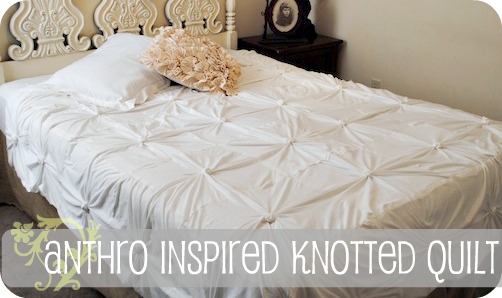 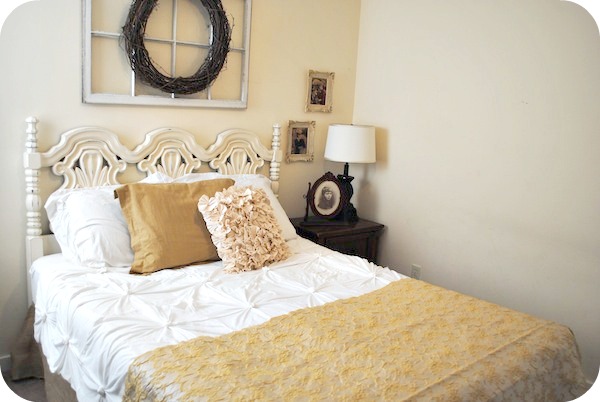 I’ve been obsessed with this comforter for like… a while. A long while. Remember when I posted about it here and here?

I’ve seen this same(ish) quilt or duvet cover around and Anthro’s was my favorite.
I really liked Anthro’s the best because I really loved the knotted look! Granted the pleats would’ve probably been easier to DIY but I love the look of the knots!
Alright, here’s the deal, I took about a bajillion (It’s a word!) pictures of this quilt as I worked on it but I think that a video will really show you how to do it WAY better than a hundred step-by-step pictures.  This is going to be a SUPER long post so bear with me!
Heeeeeeeeere we go!
For a Queen size comforter you’ll need:
– 2 queen size jersey sheet sets. I got mine from Wal-Mart and I used two flat sheets and one of the fitted sheets. Which was nice because now I have one fitted sheet to use on my bed with the quilt. The brand was the “Mainstay’s Jersey Sheet Set” it came with a flat sheet, a fitted sheet and two pillow cases. I think they are $23-something for the queen set.
– A thin queen-size duvet – I got mine from Marshall’s for $24.99
– Sewing Machine threaded with coordinating thread
– Scissors – duh!
– Embroidery thread – also from Wal-Mart for like a buck!
– 1 long quilter’s needle (I think that’s what it’s called) A long needle isn’t absolutely necessary but this is just what I used.
I’ve had a couple people asking how much they’d need for a King size bed. The only difference would be a thin King size duvet instead of the queen and one more jersey sheet (or enough jersey fabric) for 49 squares (7×7 square quilt).
Here’s how it goes down!
Step 1: Cut out 36 squares! I did 18×18″ squares. They don’t have to be absolutely perfect but try to make them as square as possible. I made a cardboard template so I didn’t have to measure and mark every time. It really helped a lot! 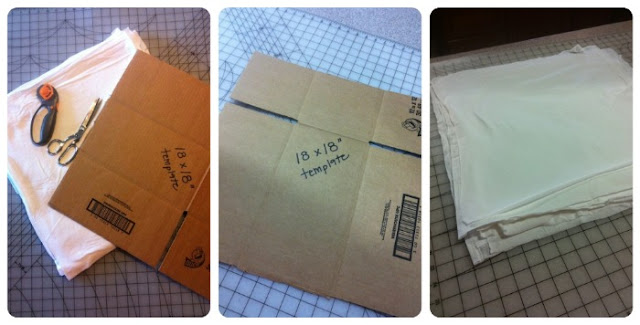 Step 2: Making the knots! This is kind of tricky (tricky to explain, not tricky to do!) so I included a video of how to do it. This is my first time making a video for the blog so please excuse my inexperience! I say “um” a lot and stutter a lot.  Just to warn you but I think it really does help you to understand how to make the knot part.  It is kind of long because I explained in detail what to do 🙂
Steps for the knot:
–Trace a circle in the center (about 4-6″ circle) using a pencil, not a hot pink sharpie! I only did that for video purposes! 🙂
-Using embroidery floss/thread, stitch under and over the entire traced circle.
–Pull your thread tight to make the “ghost” with the poof – this is the major part of the “knot”

-Finally, run a stitch or two through the center of your “poof” to create the “knot” look – seriously, the video makes it much easier to see what I’m talking about. It’s really not hard at all. 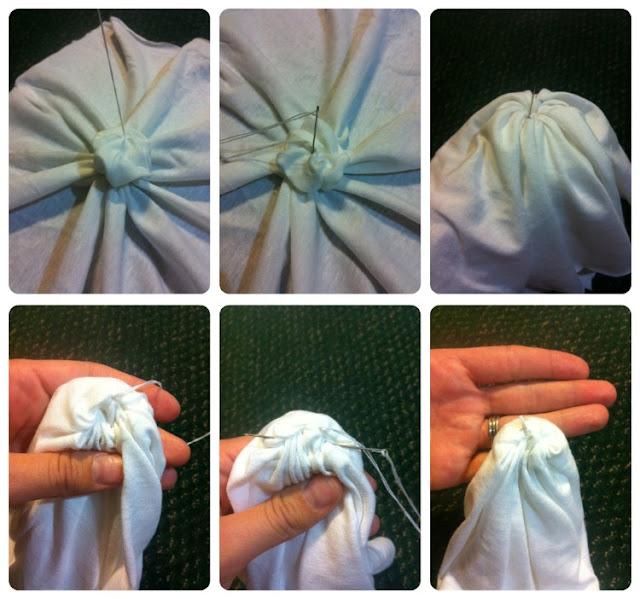 -Now you’ve got your squares all done with all the knots in place. The next step is to sew all your squares together! I sewed 6 squares in a row then sewed my 6 rows together to make a 6×6 square quilt. I didn’t take a picture of this step but it’s pretty simple! 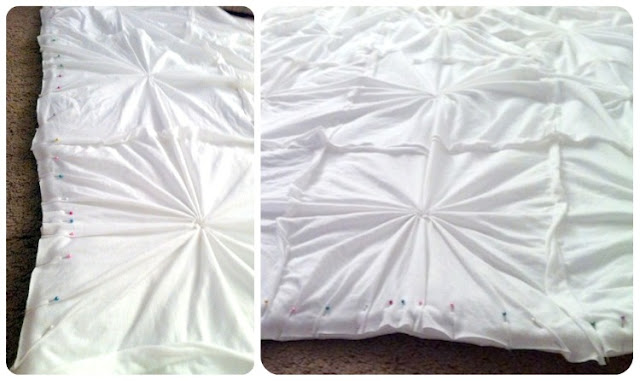 -Next, you take your duvet and pin the quilt squares to the duvet. You will pin it with RIGHT sides together! If your duvet has squares it is super easy to do this because it kind of gives you a grid as a guideline so you can make sure that everything stays pretty even.  You will want to pin little pleats or gathers as you pin so it gives it that ruched look. 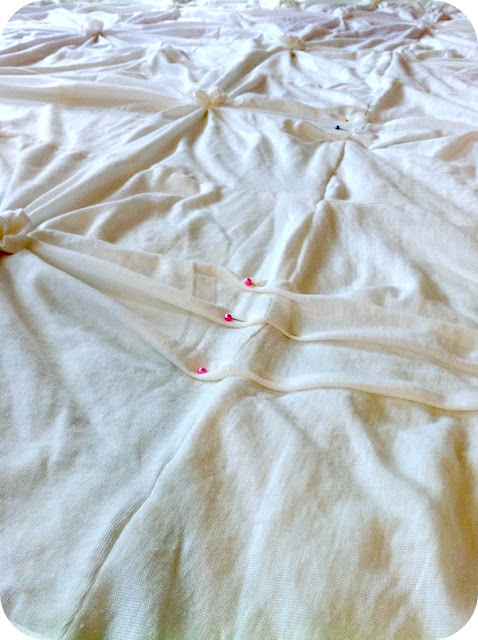 -Once you’re done pinning, sew along the perimeter of your duvet leaving about an 8-12″ opening at one side so you can flip it right side out after it is all secured.
-BEFORE you flip it right-side-out, go over your quilt 2-3 times to make sure you removed ALL of the pins. They hide SO well in their and seriously, I went over a couple times and kept finding more! You want to be really really thorough! Because, OUCH, that would hurt if you found one when you go to bed!
-With all the pins removed, flip your quilt right-side-out and sew your opening shut. You may even want to go over it one more time to make SURE you got all the pins out!
Almost there…
Now the final step is to run a stitch over the seams in between the squares. Through kojo design’s tutorial, she found this tutorial on YouTube to help you to do this really simply!
Then, YOU’RE DONE!!! Time to do the happy dance and make your bed with your new quilt!!! 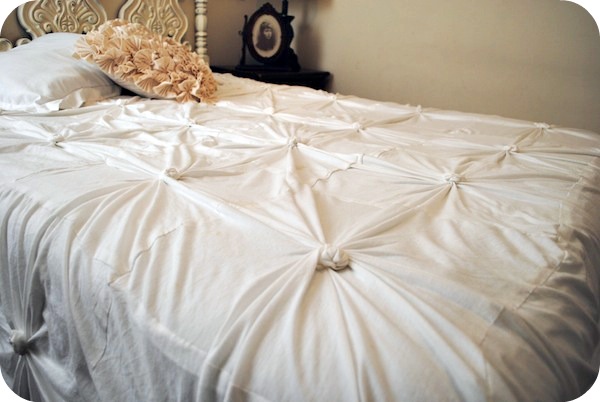 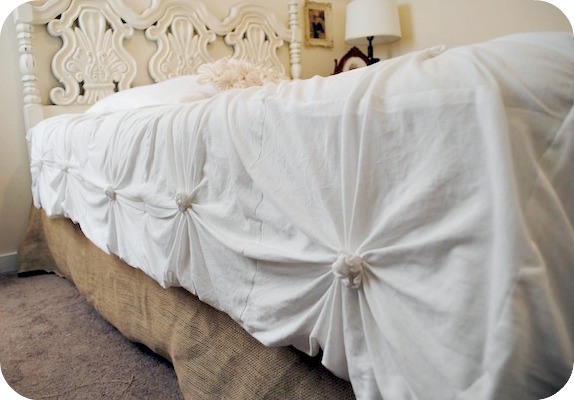 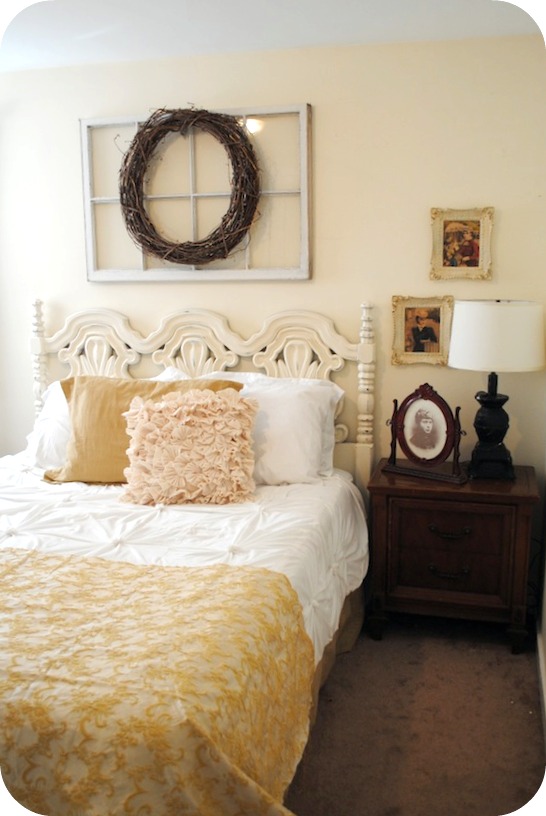 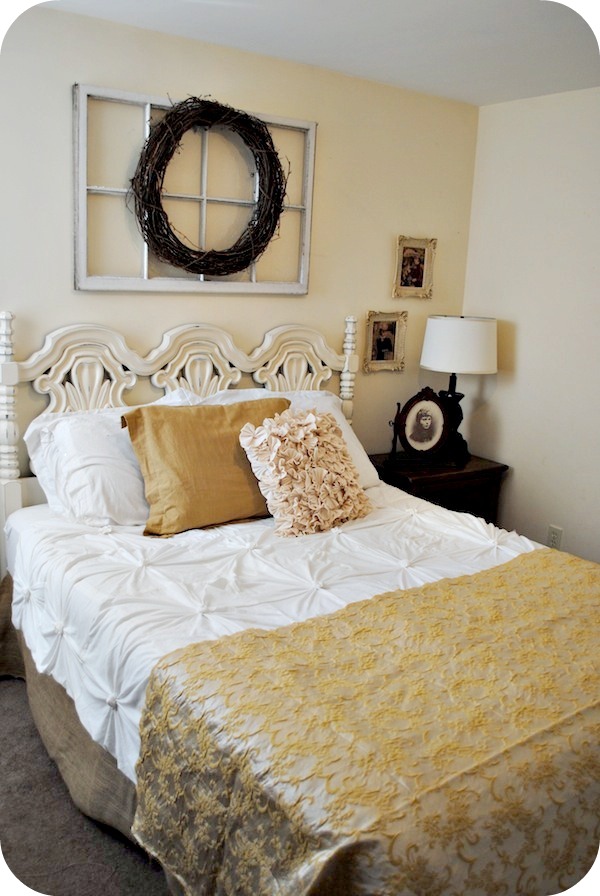 Sooo… What do you think?! I swear this was NOT hard at all just very time consuming! I LOVE LOVE LOVE my comforter! Although, I will need to find a really WARM blanket for the coming months in Buffalo!
***This tutorial was adapted from Kojo Designs – she has a very similar, fabulous tutorial on this quilt as well. Between the two, you should be a pro at making this bedding!  I couldn’t have done my own without her tutorial’s help! So special thanks to KoJo Designs.
So the question is…. DO YOU LIKE IT???