How to reupholster a sofa 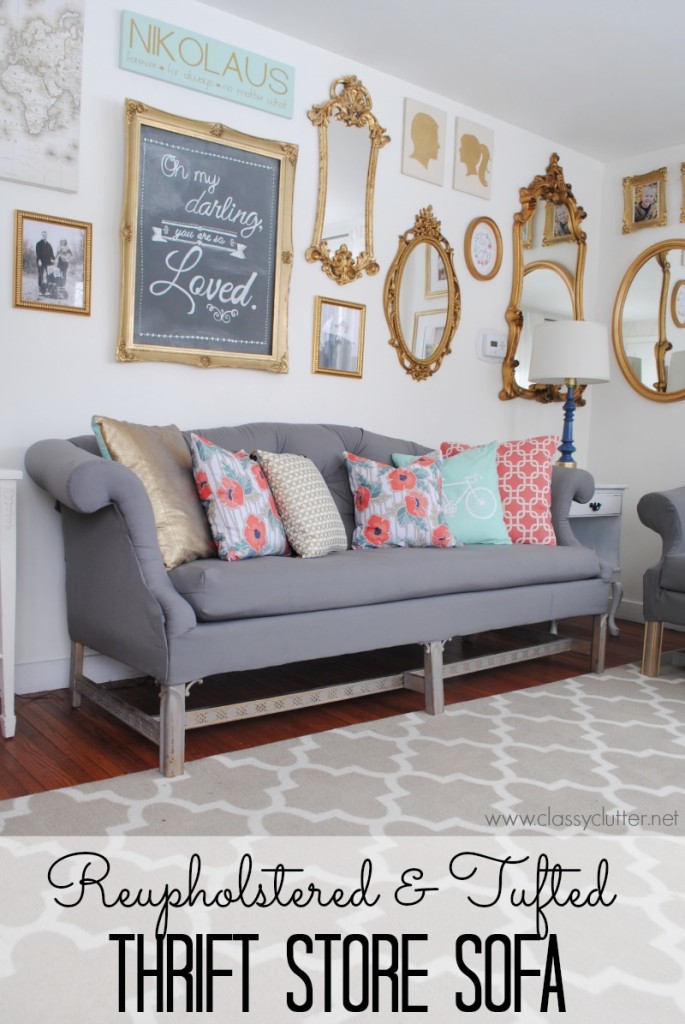 Today’s project was literally one of the biggest DIYs I have ever taken on. Not because it was incredibly difficult or something but because it was a long process and the payoff was huge! I taught myself how to reupholster a sofa. It is definitely one of the most dramatic transformations that I’ve done.

I found this sofa for $40 at a local thrift store. I already knew what I wanted so when I spotted it with an additional 50% off price tag, I knew it was time to bite the bullet and take on a massive reupholstery project. 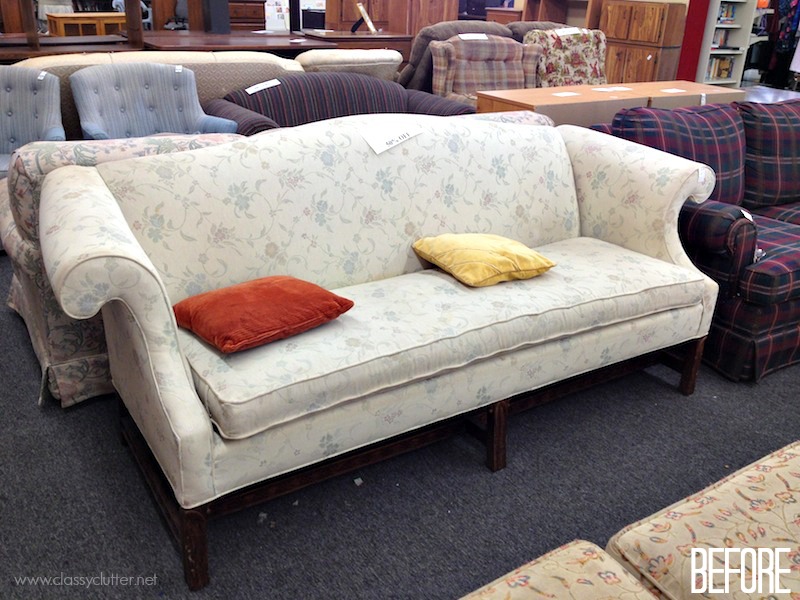 I’m pretty sure this exact same sofa was in my church building as a kid. Either that or a hotel lobby. I’m also fairly certain that my husband thought I was a lunatic when I sent him to pick it up from the store after I bought it. Don’t worry, I made him see the potential!

I got her home and, tore it apart! A sofa is not much different that reupholstering a chair or something. 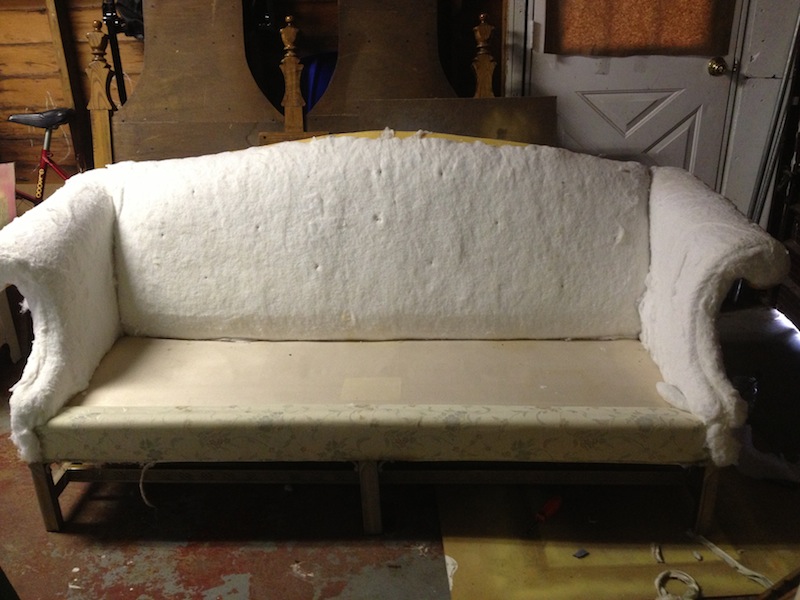 You basically take out all 80 zillion staples and remove the fabric to use it as your pattern then put it all back together! Here she is all nakey. When all of your fabric is removed  you can refinish the wood legs if you want. I chose not to remove the deck (the part under the seat cushion) but to simply cover it with the new fabric.

To paint the legs, I took gold spray paint and sprayed the legs. You can learn how I spray paint furniture here. After it dried, I took some dark grey paint and did a dry brush technique over the gold. I love how the legs turned out. 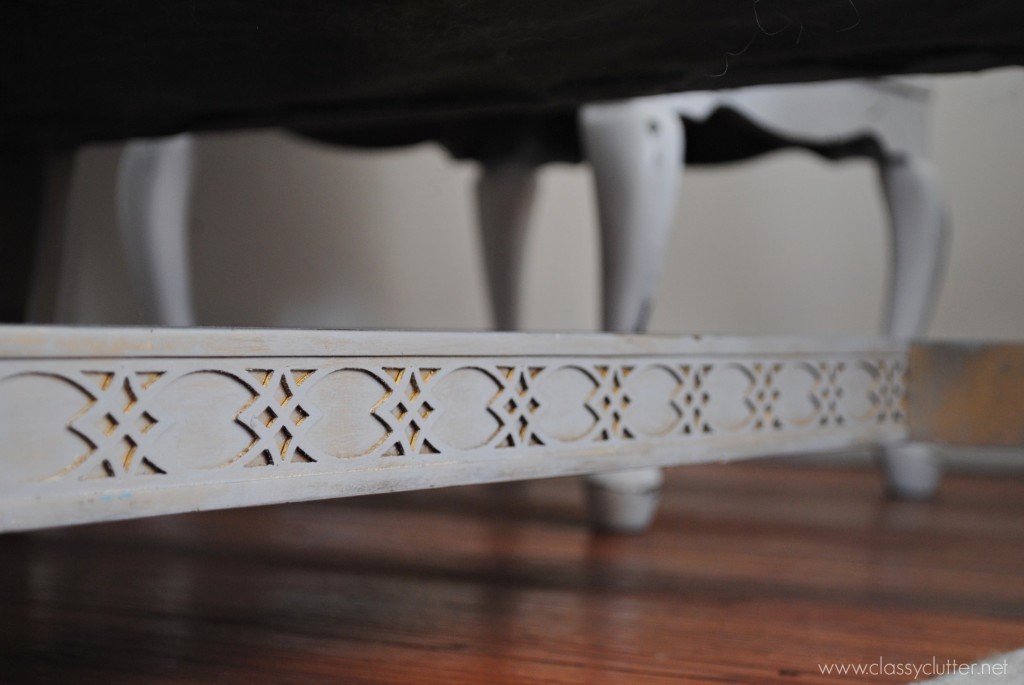 Next, time to make your pattern. I chose a grey suiting fabric and it has held up really well! I love richness of it. 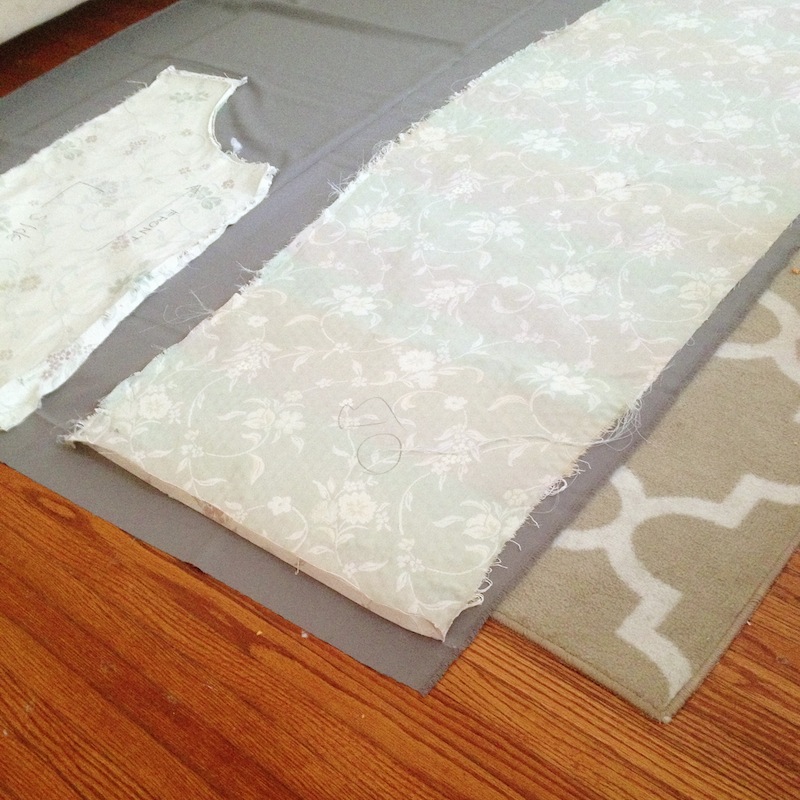 I highly suggest using a permanent marker and writing which piece is which BEFORE you take it apart. Like while everything is still intact, write on it “right arm top”, “Back”, “deck”, “front cushion” etc. Seriously, label everything! It will make your life a heck of a lot simpler when you’re trying to piece it back together.

I made the box cushion sometime mid-tear down. I needed a break from ripping out the staples so did some sewing with a friend in the meantime. 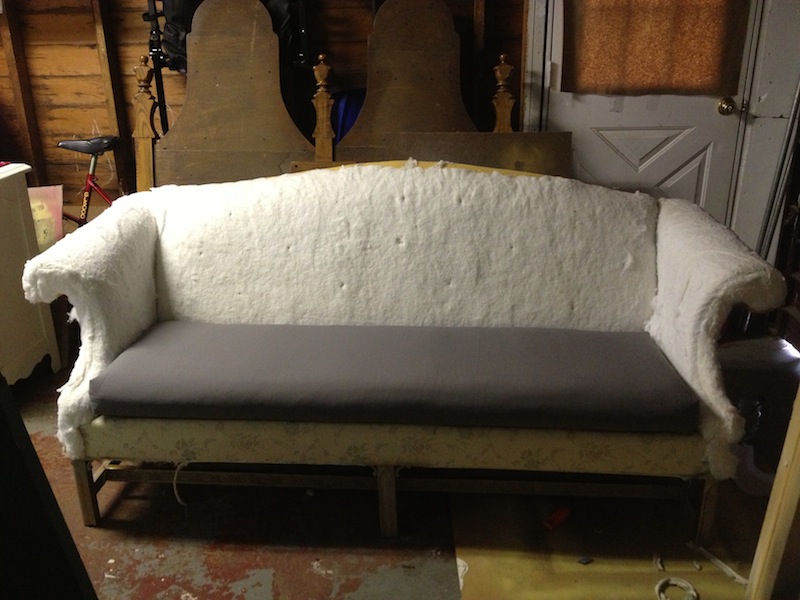 Next up, I recovered the deck and then started the the arms. This was the only other part that needed sewing (around the front curve) so I tackled that next. It is definitely the most challenging part of a project like this but if you cut your pattern pretty closely, it’s not that hard. 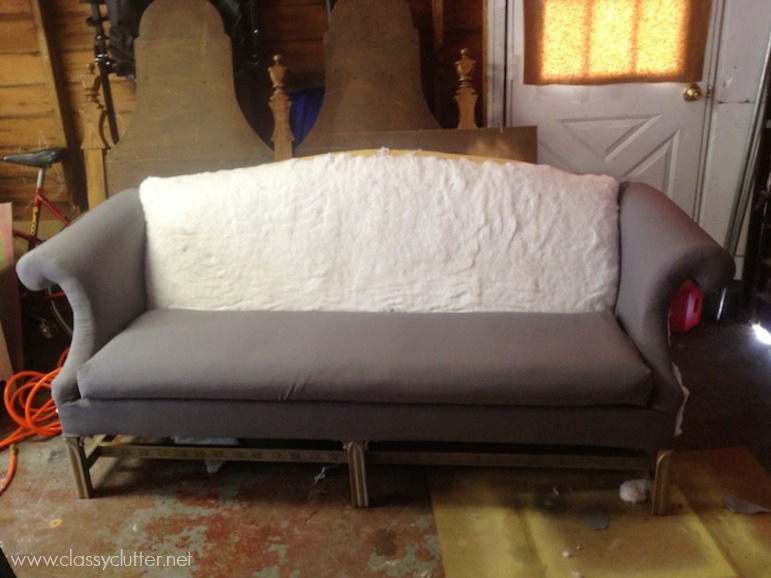 After the arms, you’re pretty much home free. Oh, I used my air compressor and a staple gun for the whole project. You can get a staple gun for pretty cheap so if you’re into upholstery at all, I highly suggest it versus a hand stapler. A hand one will work but you’re hands will hurt a lot sooner than using the air staple gun.

The final step was doing the back of the sofa. If you are not going to tuft, you just slide your pattern piece on and staple it in place, then proceed to the back and put it back together exactly how you took it off. You will probably have upholstery strips to replace for the very back panel. Here’s a secret, since I tufted and I wanted to have access to the back in case we ever lost a button, I opted to use velcro to attach the very back panel. This is totally not the professional way but it is way easier and my sofa is against the wall so I don’t even mind it one bit that it’s not permanently upholstered back there.

If you are going to tuft your chair or sofa, I will be doing a detailed tufting tutorial really soon. This part isn’t too terribly hard but it is kind of a lengthy step-by-step process so I’m going to break it up a bit for you.

Here it is all done. 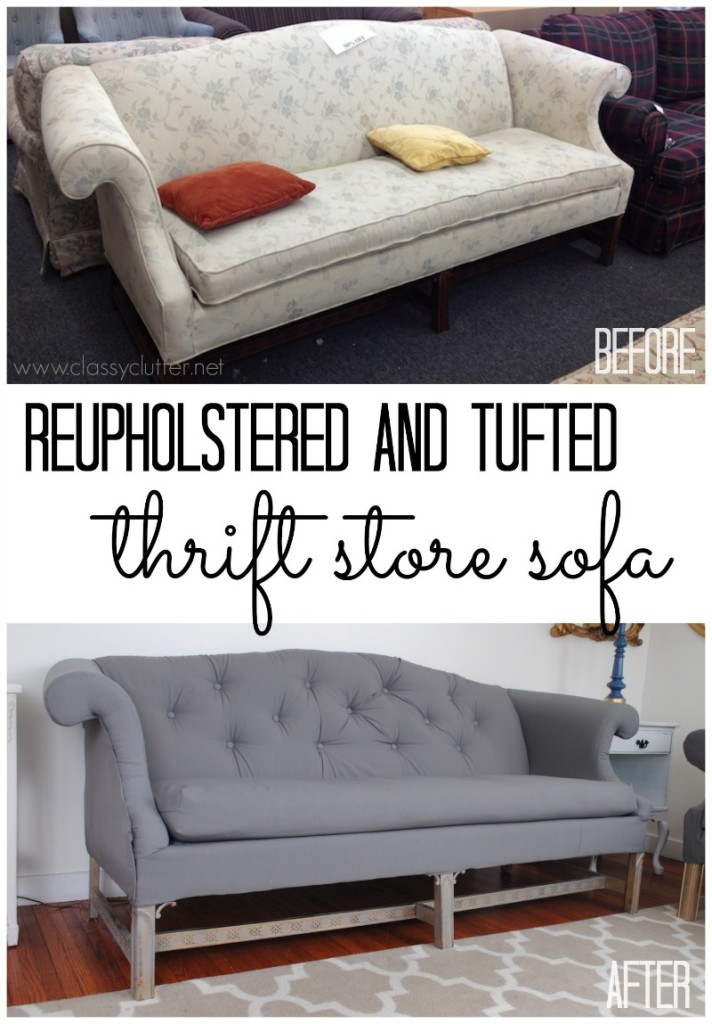 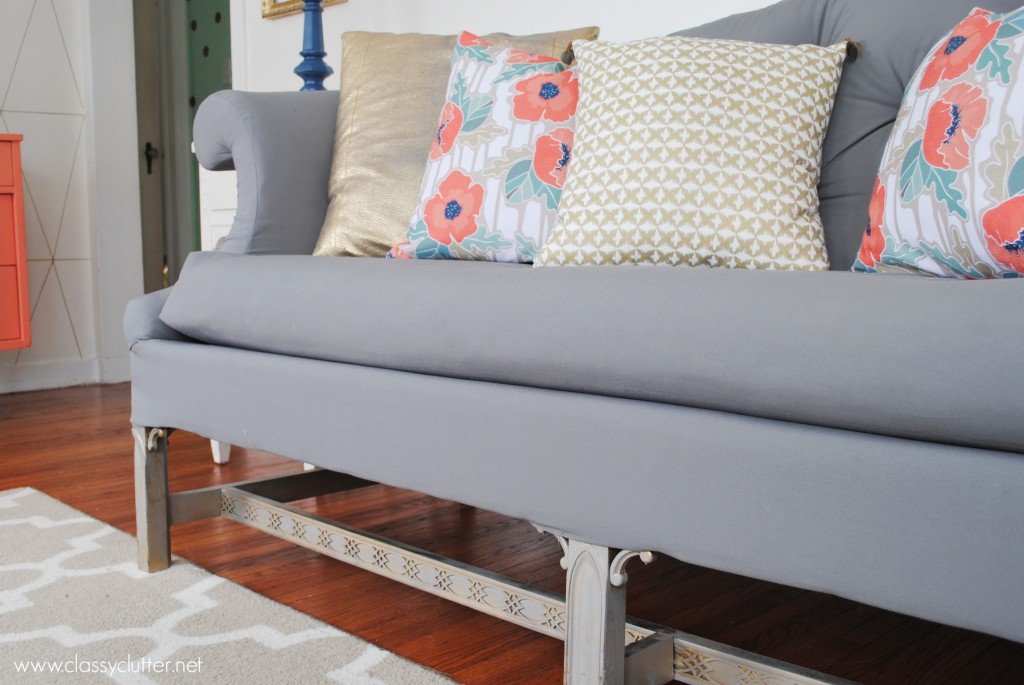 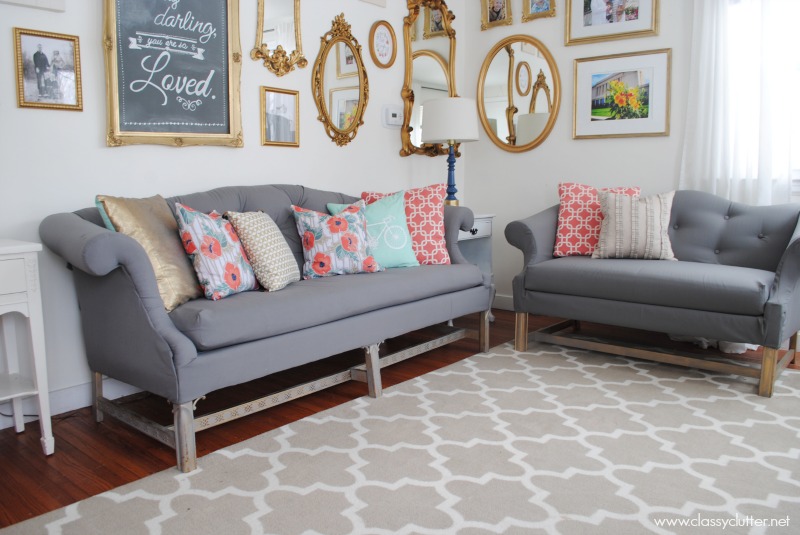 The love seat on the right was almost this sofa’s twin but when I bought it, it had a slipcover so I chose to slipcover it instead of reupholstering it all together. If you look closely, you can see that it is looser fitting than the upholstered one but it doesn’t bother me. I’m just lucky that I found a  semi-match on Craigslist to create my own sofa set. 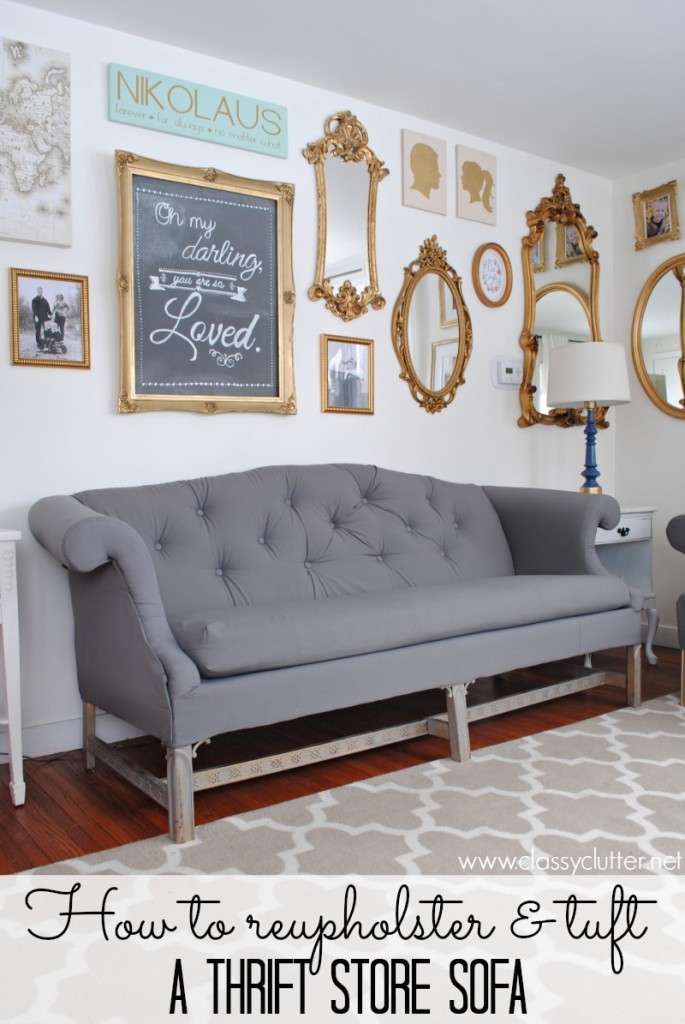 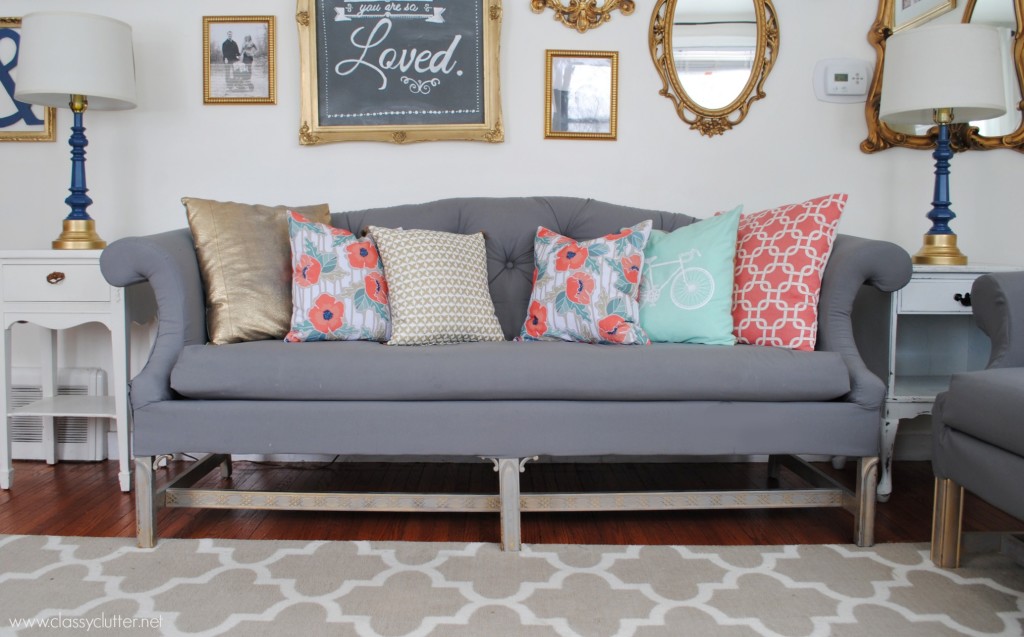 Phew! That was a lot of info! I hope you enjoyed it. What do you think of the final product?